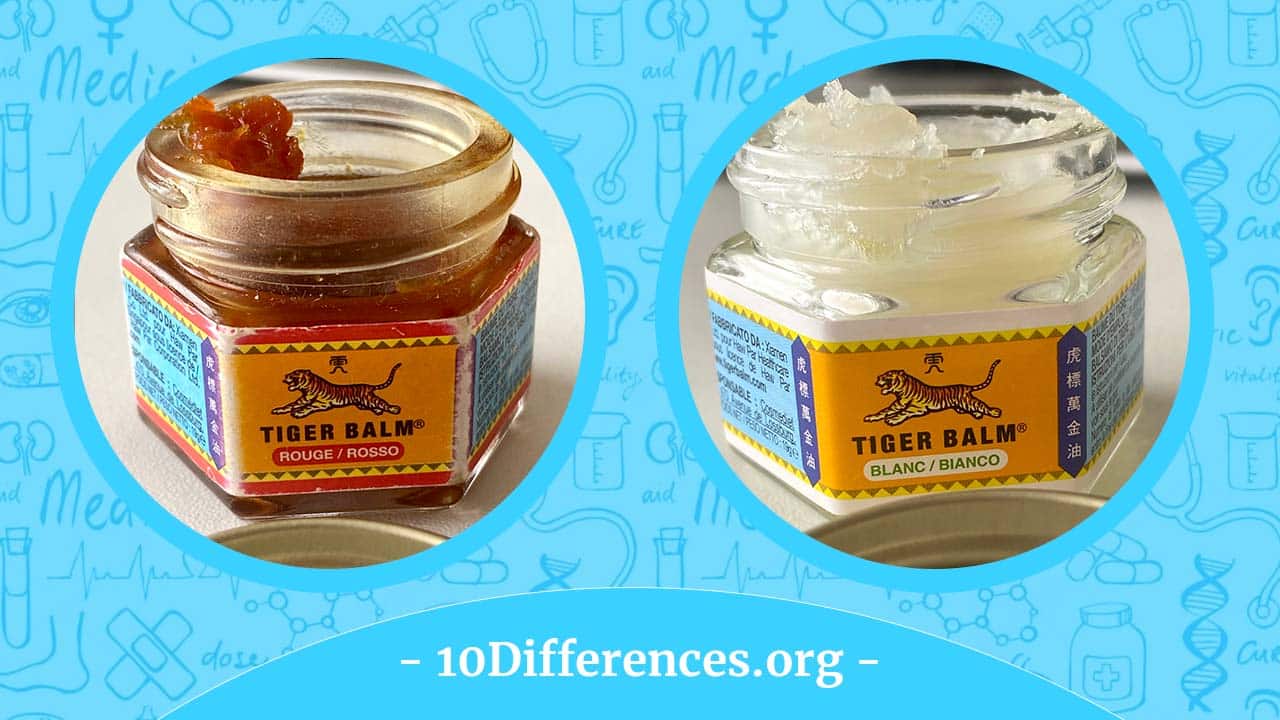 What is Red Tiger Balm?

Red Tiger Balm is a traditional Chinese ointment made from medicinal plants, the main one being camphor.

This essential oil and herbal balm is used to relieve pain and reduce inflammation and joint and muscle contractures. For the sport, it is recommended to use it before its practice for warming up.

Composition of the balsam of the red tiger:

Red Tiger Balm is a topical treatment (applied to the skin) and despite its name, it does not contain any animal extracts.

What is White Tiger Balm?

White Tiger Balm is a lighter version of Red Tiger Balm. It is particularly recommended for decongesting the nose and respiratory tract. The white tiger balm is also recommended after the effort to support the recovery.

Composition of the balsam of the white tiger:

The white tiger balm is also applied in massage and causes a very pleasant hot-cold sensation.

Difference Between the Red and White Tiger Balm

Due to their slightly different composition, red tiger balm and white tiger balm should be chosen carefully to treat your ailments.

The white tiger balm, however, is more neutral and mild in nature, so it can be used in more cases than the red tiger balm.

When to use the red tiger balm:

In which cases to use the white tiger balm:

In white Tiger Balm, the concentration of menthol and clove essential oil is much lower than in red Tiger Balm.

However, it is not uncommon to find better deals on the red tiger balm as it is the more popular of the two. On the internet, you can usually get red tiger balm for less than white tiger balm.

Applied in massage, the red tiger balm causes a warmer sensation than the white tiger balm which is more "refreshing" thanks to its high concentration of eucalyptus.

The History of Tiger Balm

In 1870, Aw Chu Kin, a Chinese herbalist, left China to go to Burma. He took with him a plant-based formula developed for the Chinese emperor. Afterward, he opened a herbal store called "Eng Aun Tong" so that everyone could benefit from this universal wellness.

He passed away in 1908 and left his recipe for the balm to his two sons, Aw Boon Haw and Aw Boon Par. Aw Boon Haw named the balm "Tiger Balm" and moved the headquarters to Singapore. Aw Boon Haw was a gifted businessman who made Tiger Balm known worldwide. Gradually, Tiger Balm became known for its effectiveness and reliability first in Asia and then internationally.

Today, Tiger Balm is manufactured for Haw Par Healthcare in China. The range of products around the Tiger Balm has expanded since there are now lotions, patches, creams, and even mosquito repellents signed by Tiger Balm.

Where to find red or white tiger balm?

Tiger balm can be purchased without a prescription in pharmacies, on the internet, and in some Asian stores.

Which tiger balm to choose?

How to use the red tiger balm?

If you want to take advantage of the benefits of the Red Tiger Balm, rub it in rather than rubbing it in. Once the area to be treated has started to heat up, you can stop your rubbing as the Tiger Balm comes into action. Repeating this 3-4 times a day will give you more results.

When you apply it, you will feel a very pleasant and soothing hot/cold sensation.

How to use the White Tiger Balm?

White Tiger Balm is applied like White Tiger Balm. You can take a dab of it and massage it in a circular motion or rub it (more effective) on the area to be relieved until it penetrates and you have a warm sensation.

To decongest the nose, for example, it is recommended to pass a little Tiger Balm between the lips and nostrils so that the vapors of the balm can be inhaled easily through the nostrils.

Should I use Saint Bernard Balm or Tiger Balm?

The Saint Bernard Balm (analgesic cream) can replace the Red Tiger Balm because it is used in case of muscular pains, tendinitis, or even contractures. It is therefore popular with sportsmen.

This balm also contains camphor and has the advantage of being less expensive. Despite the presence of camphor, the composition of these two balms is not at all the same and you will have to try one or the other to find the one that is the most effective for you.

Against mosquitoes, should I use red or white tiger balm?

Red Tiger Balm can be very effective when you unscrew its cap to keep away mosquitoes that don't like the smell of camphor. It is as effective as a chemical mosquito repellent. You can also use white tiger balm which also contains camphor, and if you have bites, it will be effective in relieving them.

How many times a day can I apply Tiger Balm?

According to the instructions for use of the tiger balm, it can be applied locally 3 to 4 times a day.

Other Articles About Health